Well, let’s get it over with. Weekly veg field photo:

Yeah, more snow. I don’t think I’ve ever fixated on seasonal changes as much as I already have this year. Being at the new farm and house, I am very anxious to experience some comfortable, warm weather. We’re also farming on our own! Once winter finally exits, we will have so much to do. My spirits are high, though. I’ve have a few conversations in which I have described the situation, the progress, and the delays, and I’ve laughed a lot, which has surprised multiple people (my mother actually said I sounded hysterical, which I found hilarious and was quite possibly true and a symptom of inconsistent sleep while on greenhouse-snow-removal duty 2 nights in a row). 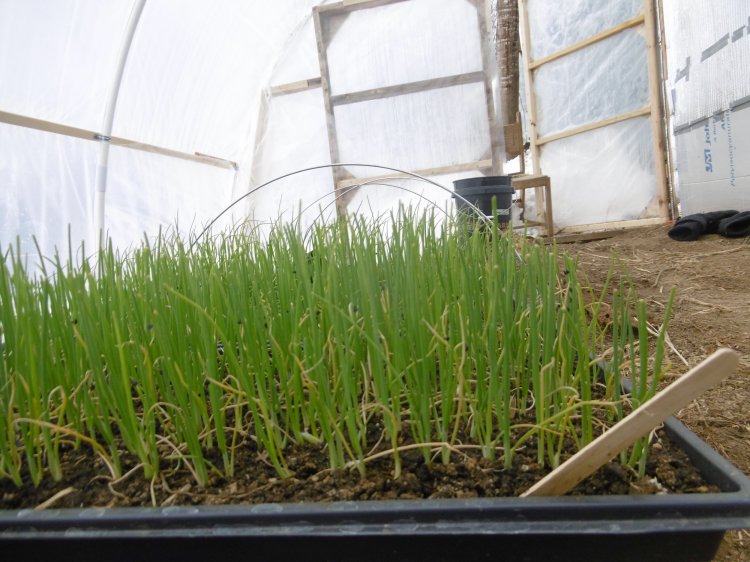 Partially, despite the surprising length of winter we’ve experienced, there are now green things to be admired and cared for! The photos above were taken on Monday 4/16 and show Early Wonder Tall Top beets on the left and an heirloom onion, Noordhollandse Bloedrode, on the right. Having the greenhouse in a stable, workable state allows for this progress, as long as the sun comes through the clouds some of the time! Another experience that has helped me personally, I think, is that of having been awfully frustrated by a variety of complications that occurred earlier in the year. I needed some time and practice to begin to learn to work on my own effectively, for long periods, and to take setbacks and mistakes in stride, learning from them rather than freaking out. The period during which I did freak out a little bit helped me to be more mindful at all times, seeing the big picture rather than being overwhelmed by each little event.

Another little thing to share: HEXAGON‘s first harvest! Not super significant, but sometimes one has to take what one can get. These onion top trimmings that topped N’s cornbread (along with some caramelized onion) technically represent our first edible harvest 🙂

In addition to the beets and onions I mentioned earlier, what else is sizing up that we’re excited about? Plenty. The tomato plants all look pretty similar, so we’ll wait to gush about the many varieties we will see and enjoy. Below, on the left, is a Palla Rossa radicchio seedling, an Italian variety that, like everything we grow, is open pollinated (meaning we can save the seed to replant if we decide to do so, unlike hybrids). We will attempt to harvest radicchio heads late this spring, and then we plan on a better fall harvest: crops like this do much better in fall. Then, it will be joined by 2 other chicories, including an Italian dandelion green. MY MOUTH IS WATERING. 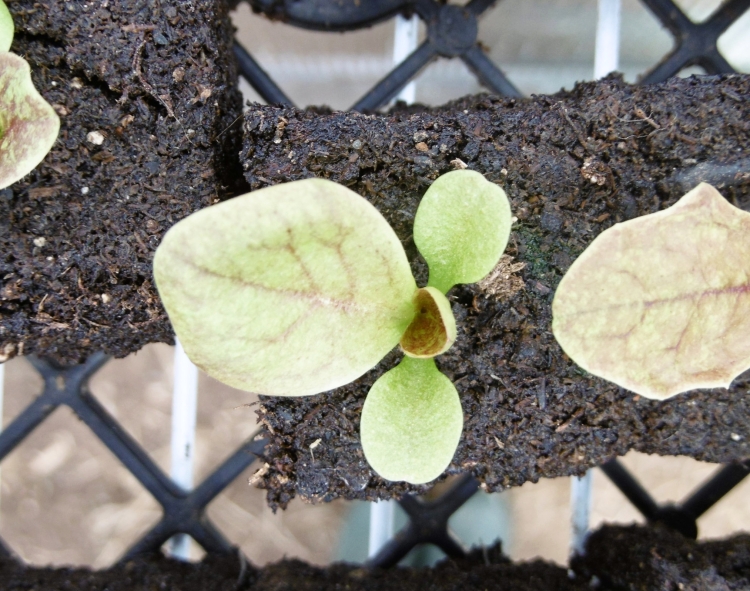 The second photo is of Peking Ta Ching Kou Pai Tsai, an Asian green that I had not heard of before making our order with Seed Savers Exchange. It is a brassica, like kale, collards, and mustard greens, and is apparently prepared in a similar way. I am very excited to try it, and to see larger, glossy, purple-green leaves! I don’t know where the hell all of this stuff is going to be planted, but I like caring for it and watching it grow for now.